What Do We Mean by Mixed Solvents?

This month we’re dealing with a complex problem that is becoming more and more prominent because of the chemistries specified and the ways of working that are being adopted by many users of evaporation equipment. We’re principally concerned with mixtures in which there is one volatile component and one high boiling point solvent. An example might be methanol /DMSO, or THF/pyridine. What is more, the two solvents don’t have to be within the same sample. A rack of tubes where each tube contains a different single solvent, will also exhibit the effect described below. Frequently a user who wishes to remove methanol/DMSO will not even mention the methanol when specifying the application, because methanol is “easy” and it’s the DMSO that is considered the challenge. However, this overlooks a rather important technical issue that we will deal with here.

To understand this problem it is necessary to understand solvent behaviour. The graph below shows the relation ship between pressure (on a log scale) and boiling point. 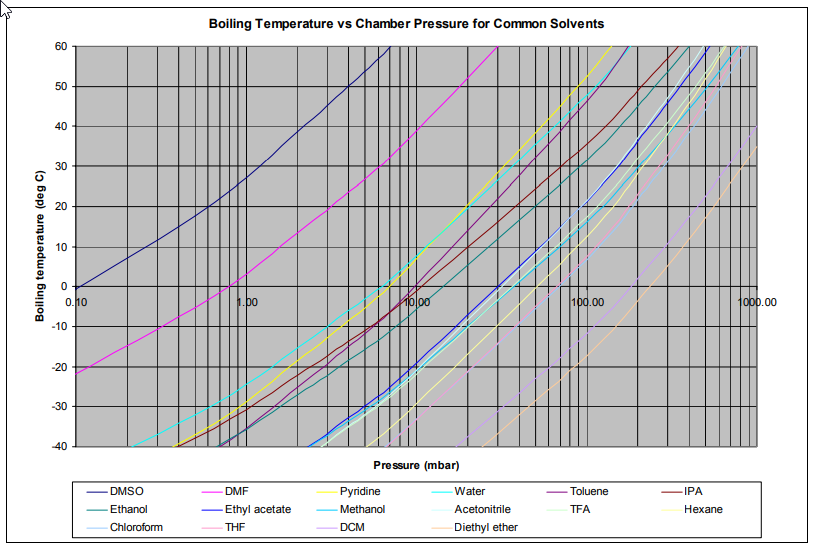 The aim with centrifugal evaporation is to boil off the solvent while not overheating the samples. The way that this is achieved with a Genevac system is by keeping the sample holder block or swing (bucket) at or below the maximum temperature your samples can safely with stand. If the solvent boiling point is less than this temperature, heat will flow from the sample holder into the samples and the solvent will boil. If the boiling point goes above the block temperature, boiling stops completely.
It is not sufficient to have the boiling point of the solvent just below the block temperature, because with only a couple of degrees difference, the heat flow will be so slow as to make the evaporation of all but a tiny amount of solvent unfeasibly slow. For example, suppose that your maximum temperature is 40 o C (and hence you never let the sample holder block exceed that), and the solvent is DMSO. If you set the pressure to 2 mbar, the BP of DMSO is 38.5 o C, so you’ll have a measly 1.5 degrees difference to drive the heat into the solution from the block. You could raise the temperature of the block, but then when any one of the samples dries, it will end up above the maximum 40 o C. So that would defeat the object. Clearly in this case it is necessary to run at a lower pressure. At 1 mbar, the DMSO would boil at approx. 28 o C (giving 12 degrees difference, a clear improvement) and at 0.6mbar it would boil at approx. 20 o C. So far, so good. Better vacuum = faster DMSO removal. Certainly nothing new there. But now lets consider the more complex task of removing methanol/DMSO.

A game of two halves

Before we get onto the main feature today, lets digress momentarily and consider another challenge we face with this particular solvent combination. The methanol is more volatile. It will be removed before the DMSO. (No surprise there.) DMSO freezes at 18 o C. This means that if we don’t watch out, we’ll freeze the DMSO while removing the methanol. If we try to remove the methanol at too low a pressure, the whole solution will drop significantly below 18 o C and some of the solution may freeze. If it does, heat flow through the solution by convection will be interrupted and the drying will slow down. The alternative, however, is to run with a pressure so high that the methanol does not boil significantly below 18 o C. For example, at 110mbar,methanol boils at 18 o C. This would leave only 22 o C temperature difference driving heat into the methanol. Since it has quite a high specific latent heat of vaporisation (meaning it takes a lot of heat per unit mass of methanol to boil it), this could itself result in delays. So what pressure should we pick for removing the methanol? Well, it depends. Whether freezing occurs at all, and whether (if it does) it significantly restricts the heat flow, will depend largely on the sample format (e.g. vial or tube) in question, and so trial and error may be required to choose the fastest setting. (Note of course that the other consideration when choosing a good operating pressure for methanol is that if the BP is too low the condenser will perform poorly and solvent recovery will be lower. 12 mbar is probably a sensible lower limit) But enough of this digression. Back to the main story.

We jump forward in time now to when the methanol has been removed from the samples and we now wish to remove the DMSO. Whatever we chose as a good pressure for methanol, we can all agree that, right now, we need the very best level of vacuum our system can achieve. And here is where the real problem becomes apparent. As the system pressure falls, so does the boiling point of all the methanol that is sitting in the condenser. As we approach 2 mbar, the boiling point of the methanol is -42 o C. Much below that and the methanol ends up with a boiling point below the temperature of the condenser. That is to say, the condenser is actually warm enough to re-boil the methanol. This results in a huge volume of vapour being produced, which the pump will have to remove before it can get the pressure in the chamber any lower than this.
The vacuum pump on a system like this is predominantly there to remove the air from the chamber at the start of the run, and then hold pretty good vacuum with fairly low flow. It is certainly not made to pump out hundreds of thousands of litres of methanol vapour in a hurry. The flow rates required would be enormous. Some manufacturers’ pumps would actually be damaged by this much solvent What this means is that there will be a substantial delay (which could be many hours) before the methanol has finally all been removed from the condenser, and before that time, the pressure in the chamber will simply not fall much below 2 mbar. And as we have already established, 2 mbar is not much use for removing DMSO at a sensible speed. This is clearly not ideal. Why not use a colder condenser? Cascade condensers designed to operate over the range -70o C to – 90o C are relatively common. However, a cascade condenser capable of providing the condensing power of the equivalent Genevac system would absorb 4 times the input power and occupy 2-3 times the bench space. Also, a -90 C condenser would not be suitable for the large range of solvents you use. Solvents like Water and DMSO would freeze within the condenser inlet aperture, eventually forming a plug.

Finding Another Way Out

We are now faced with a few choices. One, as we have already mentioned, is to raise the temperature so that the DMSO can be removed at the 2mbar level we are currently stuck with. But if you don’t want to take the solution above 40 o C, this is not an option at all. The second one is to simply wait. Eventually, the methanol will all be gone, and then the pressure will drop and we’ll get the DMSO remaining in the samples to boil. But it will be a long wait. The third one is to intervene. That is, when the methanol has all been removed, when the problem is just beginning, stop the run and drain the condenser. Then restart the run and the vacuum level will no longer be affected by the methanol. DMSO should be removed just as rapidly as if it had been the only solvent. This is pretty inconvenient, although it’s the best option so far. But what if the run is an overnight run ? This could be a real pain. There is a fourth choice. Namely a system that can remove the volatile solvent from the condenser automatically, partway through the run, without you having to intervene.

The system in question is the Genevac “Triple pot Automatic” condenser (known as the TA for short), This is available for the HT8, HT12 and the larger Mega range of evaporators. The principle is simple. There are two primary pots (before the pump) and the system alternates between them. First, pot 1 is active and solvent leaving the chamber condenses in it. Pot 2, meanwhile is “offline”, defrosting and draining as required. Then, when pot 2 is ready for use, the pots exchange tasks, and pot 1 takes some time out to defrost and drain while pot 2 starts catching the solvent. The TA will alternate between pots many times during a typical run, so not long after the last of the methanol is all captured, the next switchover will happen, the volatile solvent will be removed from the system entirely, and rapid DMSO removal can start. The bonus with this system (and this is actually the reason it was initially developed) is that you never have to lose valuable evaporation time waiting for a defrost. The system can be unloaded, reloaded, and started again immediately.

The issues outlined in this article apply equally to all the following situations • When a volatile solvent and a high BP solvent are mixed in the same solution • When the sample load is made up of many tubes with different solvents, and some tubes may be volatiles while others may contain high BP solvents. (*) • When a sample solution which contains a volatile solvent component needs to be taken to full vacuum at the end of the run to achieve good dryness, even though the last solvent removed is not theoretically a high BP solvent (for example some HPLC fractions containing ACN/Water) The TA condenser, meanwhile, is also useful when • The time lost defrosting would seriously impact throughput • The total solvent load is such that it exceeds the volume capacity of conventional condensers. • The evaporator is integrated into a robotic system; in these applications the condenser must be constantly available.

The Challenge of Mixed Solvents

Call SP - US and International